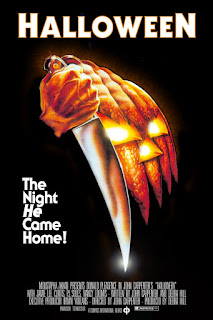 Halloween may be one of the finest horror films ever made. It is, without doubt one of the most influential, more-or-less defining the slasher film which (for better or for worse) has dominated the horror genre ever since. It is a film which I truly appreciate for its atmosphere and intensity, and I find it fascinating as a genuine turning point in horror movie history. But, while it is a very interesting transition point in horror movie history, it is interesting to think that one of the defining stars of an older breed of horror films was originally connected to the film.

I have heard from other reviewers who have looked at the Halloween series that the later films in the franchise are lacking due to the absence of Donald Pleasence as Dr. Samuel Loomis. Masked serial killer Michael Myers, they say, is only as good as his antagonist; the doctor who watched over him for so many years and now will do anything to prevent him from killing again. Pleasence would ultimately play Dr. Loomis in five of the Halloween films and he is one of the best things about the series. Pleasence’s performance in the first Halloween is brilliant – he conveys the frightened nature of the doctor so effectively. Watching Pleasence in a genuine state of fear seems to intensify the horror film all the more. And, while I love Pleasence’s performance as the doctor, it is fascinating to consider that someone else was John Carpenter’s original choice for the role of Dr. Sam Loomis. Carpenter’s original choice was a seasoned horror actor named Peter Cushing.

Being the enormous Peter Cushing fan I am, I cannot help but wonder what Cushing’s performance as Dr. Loomis may have been like. And that is what this post (hopefully the first of a semi-regular feature on this blog) shall contemplate.

So, where was Peter Cushing in 1978 when Halloween had been in production? It may be a fair assessment to say that Cushing’s glory days were rather behind him by the late ‘70s, but that in no way meant that he was a forgotten figure. Despite the fact that Hammer, the studio who had more-or-less provided Cushing’s bread and butter in the ‘60s, was no longing producing films, Cushing was still a prominent figure in the film world. He had appeared in the science fiction adventure At the Earth’s Core in 1976 and he contributed to a couple of low-budget, independently-produced horror films in the form of The Devil’s Men and Shock Waves. Of course, no one could forget the fact that Cushing appeared as the first bona fide villain of the Star Wars franchise in Star Wars: A New Hope (1977). To call Star Wars a commercial success would, of course, be a grave understatement. In that way, Cushing would have been just as familiar a face to movie audiences as a character actor as Donald Pleasence was.

But, horror was quite different in the late ‘70s as John Carpenter went to bring his low-budget horror film to life. Films such as The Texas Chain Saw Massacre and The Exorcist had been released earlier in the decade and, to some extent, made the Gothic horrors of Hammer and Amicus – the films in which Cushing became such a familiar face – obsolete. Hammer and Amicus simply could not compete with the graphic depictions of violence in those aforementioned films. It would be pretty difficult to imagine the gentlemanly Cushing in either Texas Chain Saw or The Exorcist (though he may have been pretty good in place of Max von Sydow as Father Merrin but that is complete speculation).

As Peter Cushing biographer David Miller pointed out in his excellent book Peter Cushing: A Life in Film, Cushing may have dipped his toe into this new, more violent horror film pool with Shock Waves and The Devil’s Men, but one can tell that this new breed of horror film was very different from what Cushing was accustomed to. And, to be fair, a film like The Curse of Frankenstein is worlds away from Halloween.

But, let’s say that Cushing had accepted the role of Dr. Loomis in Halloween. How would that have turned out? Well, like all of Cushing’s roles I’m sure that he would have given one-hundred and ten percent. Given Cushing’s track record for contributing an ultra-serious performance, one can only think how much gravitas Cushing would have brought to the doctor’s scared edge and his speeches. It is not difficult for me to hear Cushing’s cultured voice reciting such lines as: “He came home,” “Death has come to your little town sheriff”, and Loomis’ greatest speech:

“I met him fifteen years ago; I was told there was nothing left; no reason, no conscience, no understanding; and even the most rudimentary sense of life or death, of good or evil, right or wrong. I met this six-year-old child, with this blank, pale, emotionless face, and the blackest eyes…the devil’s eyes. I spent eight years trying to reach him, and then another seven trying to keep him locked up because I realized that what was living behind that boy’s eyes was purely and simply…evil.”

And, while I’m certain that Cushing would have been absolutely brilliant in the film (as he was in just about every role), I cannot help but think that Cushing would have been out of place. While Dr. Loomis may be one of the most important characters in Halloween, the true central figures are a group of promiscuous teenagers. The closest that Cushing ever came to being in a film with a similar cast demographic was 1972’s Dracula A.D. 1972 a film which I love, but is looked down on by most. David Miller described Cushing’s Van Helsing character therein as a man who is trying to keep up with the times and one truly has to wonder how much of the performance was scripted and how much of the performance was naturally Cushing. (That’s pure speculation and not a knock on Cushing at all.)

Peter Cushing would have been a very interesting casting choice for the part of Dr. Loomis in Halloween and, while I think that Cushing may have been excellent, I cannot help but feel that Donald Pleasence was the better choice in the long run. While Pleasence did have a history in British horror, I think it’s fair to say that he was not one of the faces of the genre in the way that Cushing was in the late 1960s. He therefore had less baggage going into the role and could create an entirely original character – one who he would play until the end of his life. In fact, Halloween: The Curse of Michael Myers (1995) was released in his honor.
*


As I noted at the top of this post I would really like to make this a semi-regular feature on this blog. While I know of a number of interesting alternate filmmaking decisions which could have drastically changed a film, I’d welcome any suggestions. So, feel free to comment below.
Posted by Nick Cardillo at 11:26