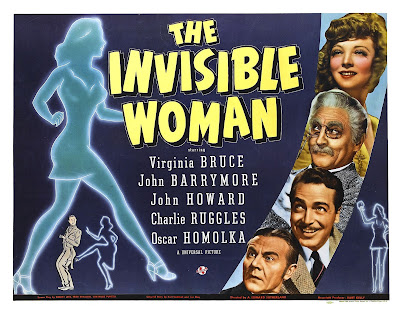 Today’s post I submit as part of the Barrymore Trilogy Blogathon hosted by In the Good Old Days of Classic Hollywood.
*
James Whale’s 1933 horror film, The Invisible Man, based on the novel by H.G. Wells is memorable for a number of reasons. Not only did it feature a fine central performance by Claude Rains as the title character and brilliant special effects by Universal Studios’ in-house special effects wizard, John P. Fulton, but its script was witty and darkly comedic. One of my favorite parts finds the Invisible Man wearing only a pair of trousers skipping down a country lane as he recites the nursery rhyme “Nuts in May” much to the terror of an elderly woman.

Despite the popularity of the film, it wasn’t for another seven years before Universal decided to film a sequel. Entitled The Invisible Man Returns, the film found Vincent Price turning invisible in order to elude the police after he’s been convicted of murder. It is a good film but it does lack the sense of humor which made the original so much fun. However, humor could be found front and center in Universal’s follow-up, a screwball comedy called The Invisible Woman. In the title role was Virginia Bruce and in the part of the batty scientist responsible for Bruce’s transparency was the great John Barrymore in one of his final roles.

Professor Gibbs (Barrymore), the very definition of dotty scientists, has perfected a machine which will turn its occupant invisible. Placing an ad in the paper, Gibbs is surprised to find that the only willing subject is Kitty Carroll (Virginia Bruce), a put-upon model who, once invisible, uses her new ability to exact revenge on her tyrannical boss. However, things are soon complicated when gangster Blackie Cole (Oskar Homolka) steals the machine in an effort to successfully make it across the border back into the United States. Kidnapping Gibbs, it is up to Kitty and Gibb’s financer, wealthy playboy Dick Russell (John Howard) to save the day.

The Invisible Woman could be viewed by the Universal horror fanatic as something of a disappoint. Its opening credits, featuring what begins as a pretty creepy theme, seems like it’s trying to lure its viewer into quite a different direction. However, once the action gets going, it is clear that The Invisible Woman will not keep anyone up at night. It is an all-out comedy rather cleverly sending up the conventions of the Invisible Man series up to that point. Due to its screwball style, the comedy of the film can at times be rather dated; Oskar Homolka’s gangster is conspicuously unfunny, but there are some scenes which are liable to tickle the ribs of a modern viewer. I suppose it comes down to what you think is funny but I found myself chuckling at quite a few bits of business in the film.

Despite the fact that Virginia Bruce is the central figure in the film (interestingly Universal had originally wanted Margaret Sullivan for the role), it is John Barrymore who is without doubt the most memorable part. The film was one of Barrymore’s last – he appeared in only two other features before his death. As noted, Barrymore’s Professor Gibbs is the archetypal dotty old professor who spends his days knee-deep in his experiments. The absent-minded, intolerant Professor is one of the film’s greatest characters and it is hard not to like him. According to co-star John Howard, the production of The Invisible Woman shows just how professional the great Barrymore was. By the time he filmed the movie, Barrymore was having tremendous trouble remembering his lines and according to Howard: “He developed, with my help, a system of cutting up the script and putting it down on the set: Behind vases, behind phones, on the backs of other actors, whatever. This way he could just look around and find the lines. And of course he was such a superlative actor, it looked as though this was an inspirational way to say the lines!”

Without knowing about Barrymore’s personal woes, I’d be inclined to say that a viewer wouldn’t be able to notice it on film. Barrymore is a lot of fun to watch and he makes the most out of tiny bits of business such as talking to his cat (and reciting Shakespeare) or stammering wildly when he learns that the only person who has answered his advertisement is a woman. Barrymore has great comedic timing in the film and has great on-screen chemistry with the other actors. 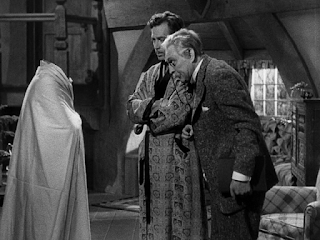 As to the actual Invisible Woman herself, Virginia Bruce brings an interesting and rather ahead of her time spunkiness to her role. John Howard is charisma personified as playboy Dick Russell. Howard had, in 1937, appeared opposite Barrymore in Bulldog Drummond’s Revenge, and earlier in 1940, he co-starred in The Philadelphia Story. Also of interest is Margaret Hamilton as Gibbs’ housekeeper, Mrs. Jackson. It is a small role but Hamilton is fun to watch and the actress surely needs little introduction as she played the Wicked Witch of the West in 1939’s The Wizard of Oz. But, for me, the other standout performance is by Charles Ruggles as George, Dick’s neurotic servant. His sarcasm and scared shtick were very funny and he enhanced the film in no small capacity.

The Invisible Woman is a fun little picture spoofing the tropes of Universal’s horror films. It hasn’t stood the test of time in the way the original Invisible Man film was, but it is without doubt an enjoyable piece of escapist entertainment. And, if nothing else, it features a great performance from John Barrymore who shows that, right to the end, he never lost his touch.
Posted by Nick Cardillo at 08:34