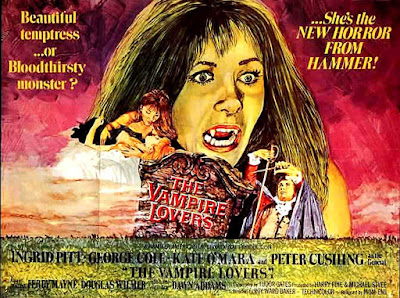 Today’s post I submit as part of the Anti-Damsel Blogathon hosted by Movies Silently and The Last Drive In.

Classic horror films are filled with tropes and clichés. They’re positively brimming with castles, rumbles of thunder, noblemen leering in darkened doorways, and a third act featuring the film’s leading lady being carried off by some monster (werewolves, mummies, and zombies are only the tip of the iceberg). Now, I love classic horror films, but over time even the tried-and-true formula which they followed could get a little repetitive. And by the 1970s, it was time for a change to occur. Interestingly enough, that’s just what happened.

1970 was a pretty good year for cinematic vampires. American International Pictures (AIP) made something of a star of actor Robert Quarry as the titular bloodsucker Count Yorga Vampire. AIP also co-produced Hammer’s 1970 vampire flick, The Vampire Lovers which was based on the novella, Carmilla, by Joseph Sheridan Le Fanu. For those unaware, Hammer revolutionized the Gothic horror film in the late 1950s. Their output continued into the late ‘60s, but with the emergence of such gore-fests as George R. Romero’s Night of the Living Dead, Hammer had to bring something new to the table. With a relaxed policy in place from the British censors, Hammer could get away with much more on screen. So, there was a little bit more flesh on display in The Vampire Lovers than usual, but the film did something unique for the time: it featured a central female character who was not a damsel. In fact, she was anything but.

At its heart, The Vampire Lovers is a fairly simple story. Age-old vampire Carmilla Karnstein (Ingrid Pitt) infiltrates the houses of nobility in nineteenth-century Austria. One such victim is the niece of the General von Spielsdorf (Peter Cushing), and following the young woman’s death, Carmilla moves onto victimizing Emma Morton (Madeline Smith). With Emma’s life hanging in the balance, the General will team up with his friend, Baron Hartog (Douglas Wilmer), something of an amateur vampire hunter, to learn the truth about the mysterious Carmilla, and exact revenge…

To be brutally honest, when I first saw The Vampire Lovers, I wasn’t overly enthused. As I just noted, the film is incredibly simplistic and much of the action is more-or-less repeated. What’s more, the film is fairly cheap-looking – the Morton’s home looks rather small and cramped for the home of an Austrian noble. But, what is important about the movie is its characters. Of course central to the film is the role of Carmilla Karnstein played by Ingrid Pitt. While Carmilla may not transform into a bat like her fellow vampires she is able to transform into a cat, and that rather nicely sums up the characterization of Carmilla. Her feline, quiet demeanor is intensely creepy, especially when she’s seducing all in her path to quench her thirst for blood. Pitt is not as bombastic as Christopher Lee’s Dracula, but her skulking, outwardly calm vampire is something of a triumph. Her role in The Vampire Lovers cemented her status as something of a cult figure. For Hammer she played another vampire (well, sort of) in Countess Dracula (1971) and for Hammer’s rival, Amicus, she appeared opposite Jon Pertwee as a bona fide creature of the night in The House that Dripped Blood (also ’71). 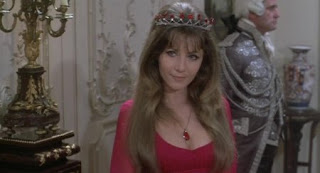 Carmilla is, naturally, the centerpiece of the film which – in 1971 – was something of a scandal. The Vampire Lovers more-or-less created the lesbian vampire sub-genre, a topic which was rather taboo in early ‘70s cinema. But, this aspect of Carmilla's character managed to make her a far more complex, and separated her from the traditional female lead of the era's horror films (more on women in later horrors in a minute).

The rest of the cast is also worthy of note. They, like Pitt, elevate the material which is light on plot. Peter Cushing, my favorite, is rather underused, but the prospect of seeing Cushing share the screen with Douglas Wilmer is, I think, worth the price of admission. The two men both played Sherlock Holmes for the BBC, so seeing two different Holmeses match wits to destroy a vampire is simply too much for my Sherlockian-crazed mind to digest. Madeline Smith who co-stars as Emma Morton almost steals the show. Her deterioration at Carmilla’s hands is genuinely moving and rather painful to watch (I mean that in a good way). Smith would make the rounds in British cinema in the coming years: she turned up sharing a bed with Roger Moore’s James Bond in Live and Let Die and appeared in Hammer’s Frankenstein and the Monster from Hell, the studio’s final Frankenstein film. Also worthy of note is Jon Finch who, later in 1970, would star in Roman Polanski’s Macbeth, and later in Alfred Hitchcock’s underrated gem, Frenzy.

Carmilla Karnstein would turn up two more times for Hammer. Their second film in their loose trilogy, was Lust for a Vampire, a dull and lifeless film often regarded as one of Hammer’s weakest efforts. However, the studio’s final film to feature the character is, perhaps, one of their finest: Twins of Evil. Peter Cushing is back in an out-of-character, but brilliant, cold-hearted role.

As I noted at the start of this post, horror films don’t always portray women in the most positive light. However, in an article written for The Telegraph, Anne Billson, makes the assertion that horror roles can, in fact, empower females. That is not to say that there isn’t (as Billson calls it) “blonde fodder” in horror films, but when one takes a minute to realize that a number of horror films feature better female characters than male characters, one begins to think that we have been misjudging the genre for a while. Who is the only survivor of Tobe Hooper’s The Texas Chain Saw Massacre? It’s Marilyn Burns’ Sally Hardesty. How about in John Carpenter’s brilliant Halloween? Laurie Strode is the only central teenage character to walk away alive. And, perhaps most famously, it is Jodie Foster’s Clarice Starling who saves the day in The Silence of the Lambs. (When I first heard about the anti-damsel blogathon, Clarice came to my mind first.)

Horror films do give women interesting opportunities on film and though The Vampire Lovers didn’t begin that tradition, it was one of the first to present a women in a horror movie not a damsel. Carmilla is anything but a damsel. She’s a sly, cunning, and manipulative character; something which was pretty uncommon in 1970. It’s not be the best Hammer horror, but its originality, and boldness to portray characters who were not born from the stock, makes it an important milestone in the history of horror cinema.
Posted by Nick Cardillo at 06:39